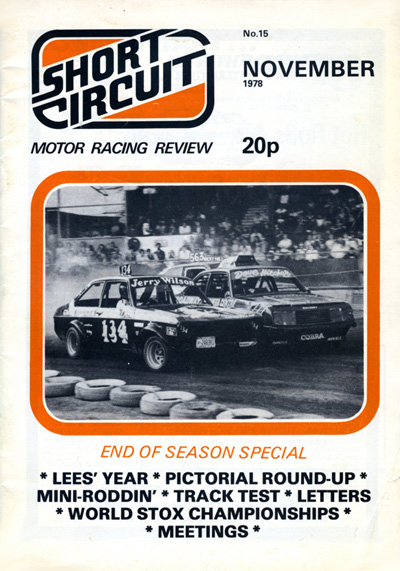 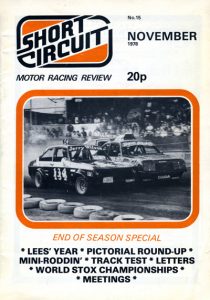 Two of the first writers to come on board ‘Short Circuit’ in 1977 were Graham Brown and Chris Jones, who tackled, respectively, Hot Rod and Superstox/Saloon Stox columns. They were a great help getting the magazine rolling and both are still around the tracks, Graham assisting with the organisation at National Hot Rod meetings and writing, as he has done for almost a quarter century (how scary is THAT. GB?) about that sector of racing in ‘Motorsport News’.

Chris worked for Trackstar Promotions for a while and has commentated at a lot of different tracks, including Arena-Essex as well as Swaffham. King’s Lynn and elsewhere and has recently been back to his “racing roots’ at Wimbledon Stadium, where his dad. Dennis, was the ‘Man on the Terrace’ in all sorts of publications for many years – Jones senior wrote a few times for us too and made a pleasing link for me with the ‘Stock Car Racing News’ that inspired me so much.

Correspondents and photographers, who have contributed regularly, or only occasionally, have abounded, and we are grateful to each and every one. Some were writers in other fields, some worked for promoters, some stayed a while, others soon quit when real life intervened with the necessary deadlines any publication needs to enforce.

Kevin Wegg was an amusing and occasionally controversial writer for some years, John Eddington did a lot of stuff from the north west when Crewe. White City and other tracks still ran. There were lots of photos from Dave Williams from Gloucester, who covered Autograss and the many and various divisions at Northampton for some years.

Pete Hearn, a regular with the Stox mags was always fun to read and he did a few pieces for us too. BriSCA commentator Bev Greenhalf has ruffled a few feathers in his occasional contributions over the years. Spedeworth’s Dave Smith wrote an awful lot of race reports in the early days from the tracks we could not always get to.

Jim Turner has been covering Scottish racing seemingly forever and still appears to love the sport. I am bound to miss a lot of people out; it is nothing personal.

Jerry Fisher is still around and went from the south to the north and back again, the late June Cochrane used to provide Midget racing material regularly, as Anne Sayell would later do. Many new folks have come along in recent years and provided superior material in word or picture – just a few of the ‘younger guys’ include Daniel Ruston, Matt Bull and, Steve Linfield, while Mike Greenwood, Midlands Stox snapper and big fan, like myself, of American short track racing, continues to contribute great pictures as does Colin Casserley, and John Hyam has been around the tracks longer than nearly everyone except ‘yours truly’!

You know who you are, and the list of names is there on page 4 or thereabouts, but this is a personal thanks to everyone who ever helped out in any way from the ‘geezer’ wot started it all off. So, thanks, as ‘MAD’ magazine used to say, to the ‘usual gang of idiots’ (we must be, mustn’t we, out in all weathers!) and all those who aren’t with us anymore.